YASAI’s Bound by Nothing: Breaking through Walls

HOLD UP — before you begin reading, listen to YASAI’s latest EP here.

Recognise the boys? Yeah, they were so good, we couldn’t stop listening — and wrote about them twice.

With the release of their highly anticipated EP, Bound by Nothing, the 8-strong rap group, YASAI, showcases their creative passion and drive for music, completing every part of the production process by themselves and with special guests Faiz Shamir and YAØ. Like their previous works, Bound by Nothing is a collage of different styles; there’s funk, hip hop, rap and a bit of rock. They created a tracklist reflective of different tones and genres, giving us that signature diversity of sound seeded in solid beats and a distinct hip-hop backdrop.

YASAI member, Young An states that: “No one and nothing can stop us from expressing ourselves,” and with Bound By Nothing, this is what they have set out to prove. With each track warranting its place on the EP, the bar is raised as YASAI brings out their deftly produced tracks. 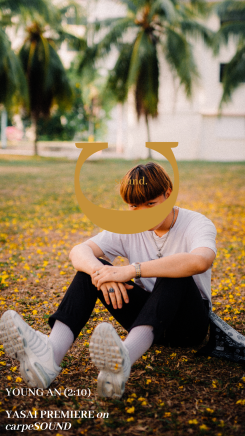 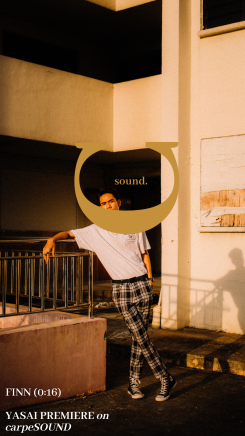 My personal favourite is Blood, the opening track to the EP. It starts off with heavy, electronic beats and powerful rhythms. Their lyrics evoke a certain power in the listener and confirms the group’s talented skills. It’s irresistible, raw and bold. I can’t help but find myself drifting to the [ replay ] button every single time. 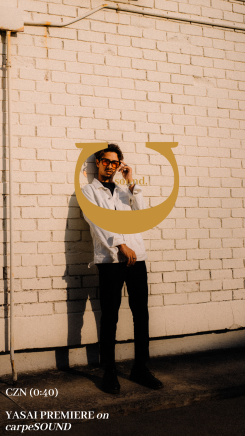 The diversity in talent is evident in their pieces with each member playing a key role in the production of each song. It’s second track, Veranda, shows us a whole different side to YASAI. It fuses funk with hip hop and sees the group delve into new music territory. Upbeat and cheerful, it gives off playful vibes and demonstrates the group’s ability to diversify their music.

Their third track, There For Me, recreates the experience of being there for somebody else, with the hook “(You can) Be the one that’s gonna heal my mind / I got your back just don’t leave me behind” subtly nodding to the power of someone else in providing comfort during “the darkest times”. Yet, evocative imagery breaks through to the simpler statement, “I’m the place you can resign”, highlighting both the opportunity and gratitude to be someone else’s safe haven. There for Me elicits applause from any listener, for the creation of a nuanced declaration of unconditional support”through rain or shine” melds into the rock melody perfectly.

“I’m very thankful for everyone that’s giving it a listen and sharing it on their social media. We worked super hard on it, and are glad that our fans are showing us so much love”, said YASAI’s co-leader, KINGKAUNG. “We definitely feel motivated for our third and final EP, which (production) will be starting soon — ’cause we don’t rest”, the group’s visionary teased just three hours after Bound by Nothing dropped yesterday evening.

With their third EP in the works, one can only look forward to what else they are going to bring to the table.

Here’s the full conversation we had with YASAI on Bound by Nothing, also on IGTV as a pre-release to their EP drop.

How did you come up with the name YASAI, is there a meaning behind it?

Finn: If you look up YASAI, it means vegetable in Japanese. We did not realise that when we came up with it, but for us, it means more of a showing of feeling and expression while having fun as a band of brothers.

‘Bound by Nothing’ is something so limitless. As a group that does production, vocals, even design — there is no limit to what you guys can do! What are some of your favourite parts each about the new ep?

CZN: So one of my favourite parts of making the EP was that we experimented a lot with fusing in other genres into the music, besides Hip hop, such as a bit of funk, pop, rock, just genres in general that inspired us individually and we found ways to include that into the EP while still keeping the foundation of it  as Hip Hop, and it kind of ties back in with the title “Bound by Nothing” where we don’t want to (be) bound (by) a specific style or genre — and we just want to keep the creativity free flowing. One of the songs that its evident in is “There For Me”, because when we heard the instrumental to it, there was already kind of a rock vibe to it. So when, so we wrote for it, in terms of the lyrics or the way we delivered, or the melodies, we took a lot of inspiration to that, and even the breakdown of the song where we made it clear that it’s a very rock-inspired song with the live drums and the electric guitars and the distorted vocals just to really bring it back home to what inspired that song and I think that was one of the most fun things to do on the album- to just experiment with different genres while staying true to hip hop-.

“It kind of ties back in with the title “Bound by Nothing” where we don’t want to (be) bound (by) a specific style or genre — and we just want to keep the creativity free flowing.”

Is there a certain message that you guys want to share with your latest EP? What’s the story behind it?

Young An: Our second EP in the trilogy, titled “Bound by Nothing”, signifies YASAI as a group of artist, people usually fail in speaking up about how they feel, but we believe that the music scene is a form of expression –  not just for us, but for every individual out there- no one and nothing can stop us from expressing ourselves and that is what the EP, Bound by Nothing, expresses.

What was the rap scene like when you first started producing music together? Where do you guys see the local scene going, and where do you guys wanna take it as a rap group?

H: When we started off, the local scene wasn’t that big and many acts were doing underground hip hop, but as time passed, the scene got bigger and many new talents emerged, and even some OG’s made a comeback. I’d say that the local scene is rapidly multiplying in size and starting to make a name for itself. I think for now our aim is to venture more into different genres, that would be very prominent in our latest EP, Bound By Nothing. But as an eventual goal, we want to establish YASAI across Asia and introduce the world to Singapore’s music.

What’s the best piece of advice that you guys have been given about your music career?

Enya: Okay when we were actually making our first EP, Izz from Island Boys actually gave us a really good piece of advice about our music career, and that was: No matter how far we make it with our music, we have to always remember our roots and our origins. To never forget where we came from, the struggles and challenges that we faced along the way, because those are the important things in and it’s built us to where we are today.

You’re all very musically diverse, from producers to rappers to vocalists, what were your paths to becoming artistes?

Skinny Yung $wiss: So in terms of paths, we all started differently before YASAI, some of us started off uploading music to Soundcloud and some of us haven’t done music at all before YASAI. So, we started off (our career) just by recording music at either one of our homes- we actually recorded one of our Cyphers, CYPHER I, in our school studio, which we booked.

“Jumping from house to houses every week, not to mention the connections that we slowly built, and even the love we got from our supporters, it really enhanced our paths.”

I feel like we were pretty much at our humble beginnings, you know? Jumping from house to houses every week, not to mention the connections that we slowly built, and even the love we got from our supporters, it really enhanced our paths. And also like, what makes us artists are that we listen to a lot of music, you know? And this specific genre (Hip Hop) it’s a common ground for all of us as we all listen to that genre. But of course we all have different tastes and different preferences in artists, but that’s what makes us different in a way, and it helps us produce different sounds for YASAI. For example, H started off not listening to hip hop at all, he was more of a classical guy, so we kind of influenced him and now he’s expanding his horizon and everything. And SIT, he’s more into old school boom bap, so you could see his influence in some of our songs and for me, i’m really into new gen hip hop, so if you fuse all of it together, you get YASAI. So I guess that’s how we become rappers, vocalists and artists.

Being in an 8 person group, there’s bound to be creative conflict and differing opinions on where you want a particular song or album to go, how do you deal with these conflicts and how has it affected your creative process?

TY Bling: Well for us, we usually have a majority vote on creative direction whereby ideas that majority of the group agrees with will be carried forth, and when we can’t decide, we tend to come up with 2 versions and get a 2nd opinion from the people that we trust. At the end of the day, everybody’s opinion in the group has an equal standing. There have been occasions where we completely let go of ideas because not all the 8 boys are about it. Dozens of unreleased songs and content ideas stem from a place of all the 8 boys being enthusiastic about releasing it and I think that having this system really helps each and every one of us as individuals to be very critical of our work and when our idea is criticised, it comes from a constructive place.

“There have been occasions where we completely let go of ideas because not all the 8 boys are about it.”

At the end of the day, we want to release creative work, music, content and stuff like that for the better of YASAI. So being able to have other people to scrutinise our work for the better of the group is definitely something that helps us be better artists individually and collectively.

Catch up with YASAI here.

Like Loading…
← Edson Charntor: Letting it all Wash Away
→ THROUGH THE LENS OF: Celebrity photographer reinhardt kenneth