COLLAPSE OF CONSTRUCTION | THE TRUTH ABOUT IT 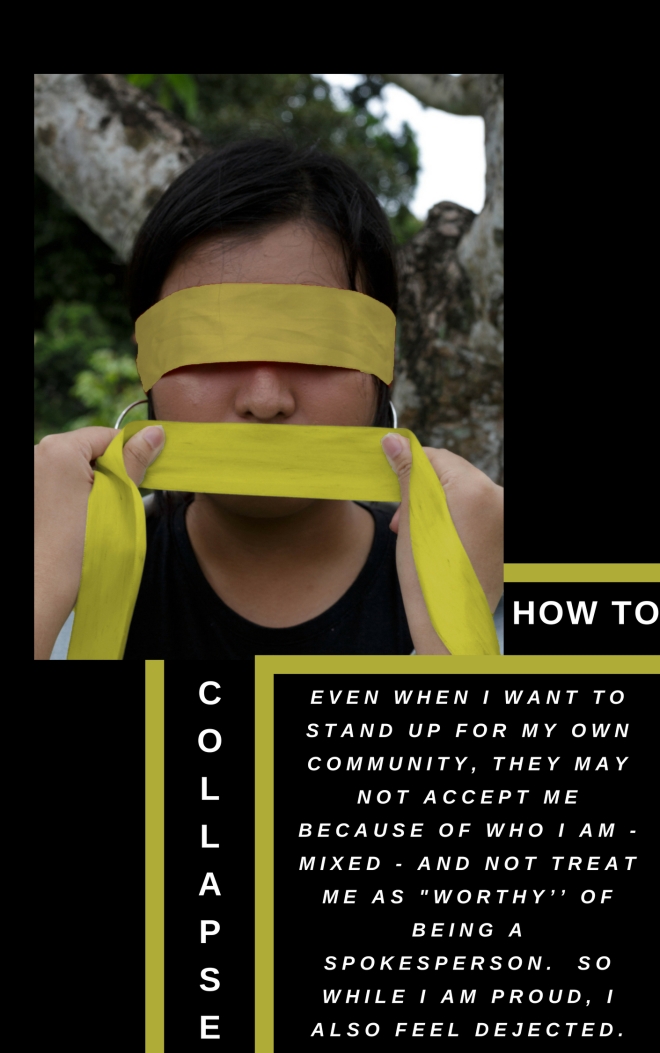 We’ve come to the middle of our campaign. The question is, is #CollapseofConstruction simply a campaign brought in to highlight the need to break negative constructions, that prevent us from celebrating each other’s diversity?

The answer is no. Collapse of Construction is not just a campaign, but functions also as shelf for catharsis; for our featured individuals to ‘shelve’ their thoughts on representation of themselves, of their own communities, or of others. #CoC is like a diary of sorts and diaries do not only contain the successful stories, but the difficult days as well.

Last post, we talked about going beyond Acceptance and Accelerating the process of a united community which preserves the beautiful diversity within. As we flip a page in the diary, we’re going to get a paper cut – we’re going to talk about a major set-back that Rasya faced as an individual of mixed ethnicity, who strongly believes in standing up for her race – the Malays.

“EVEN WHEN I WANT TO STAND UP FOR MY OWN COMMUNITY, THEY MAY NOT ACCEPT ME BECAUSE OF WHO I AM – MIXED – AND NOT TREAT ME AS “WORTHY’’ OF BEING A SPOKESPERSON.

WE ARE THE SAME, BUT DIFFERENT

It’s not that Singaporean Malays and Indonesian Malays have a bad relationship — we just don’t have a good one. It’s almost like how Singaporean Chinese sees Mainland Chinese people. We are the same, but different.

SOMETIMES, I’M MADE TO NOT FEEL LIKE A MALAY, BUT I PROMISE YOU, I AM.

“EVEN WHEN I WANT TO STAND UP FOR MY OWN COMMUNITY, THEY MAY NOT ACCEPT ME BECAUSE OF WHO I AM – MIXED – AND NOT TREAT ME AS “WORTHY’’ OF BEING A SPOKESPERSON.

Rasya is one of the strongest people I know; she attends forums and talks to learn more about her culture, and invites people to discuss with her on how her community deserves more than the marginalized positions they are often placed in. There is both bravery and tenderness in her love for her community as a Malay Singaporean, and her willingness to speak out for what she believes in –

“I’m sorry if you’ve heard this before, but I need to talk about how people in my community – Malays – are sometimes – or more than often – marginalized.”

What is important is the fact that she had to apologize before diving into our conversation, and that she hasn’t felt the need to apologize just one  time. It’s happened before. However, she’s continued to share her own stories of her culture, determined to prevent the community she definitely considers herself a part of, from being neglected. And that opened my eyes to the inaction and lack of  empathy that persists to restrict certain individuals in these “tight spaces” from contributing fully to their community, and the creation of a truly harmonious society.

“Sometimes people hear about Malays getting less opportunity, less presence, and the shorter of the stick a little too often, and we become the problem instead of the people who marginalize us.”

“I know. I know.” Rasya stops to brush hair out of her eyes, hoops glimmering in the sun. We’re about to get ready for the shoot, and I get a sense that we’re photographing a fiery flame of light and strength.

Rasya is not yet twenty years old, but already, she faces the underlying layer of tension between communities and within her own community – because she is partly theirs with a heritage that belongs to another group of people as well. But what’s wrong with being part of two different communities, and attempting to speak out for both?

The challenge with doing that is the idea that you haven’t fully faced the struggles or climbed over the obstacles that are exclusive to one community, and that therefore, you don’t deserve to speak out for them. Because you’re wearing a shoe from two different pairs, one painted Colour A and the other painted Colour B. There’s a mismatch, and now, there seems to be a mistake in you trying to speak out for them.

“I try my best. And I will continue to do so. I just want acceptance, too, first.”

Our takeaway wasn’t that Malay people in Singapore are marginalized. What Rasya taught us was that the challenge of highlighting the unjust acts that disadvantage one’s community is a challenge we will all face, because there has been a perception that only those truly from a community can attempt to fight for fairness for it.

We’re all young people, and in Singapore we are very privileged – think about it: In school, we are given the opportunities to learn about the differences between our friends and ourselves in terms of race, culture, ethnicity, heritage, religion – and we are also taught to appreciate these differences. While this value of appreciation has not been a value that all Singaporean students grow up to carry, we are still privileged to have learnt about Collapsing the Construction in our very own classrooms and creating a safer space for such discourse on race in Singapore. If we have all learnt about upholding the values of respect, kindness and appreciation of diversity in Singapore, then do not be afraid of clutching this value in your sweaty palm, and throwing your voice out into the air around you, to let people  know that you embrace the differences between you and them,

and that you will continue fighting for everyone to have a place in diverse Singapore.

Youth are not blind to the apathy or lack of empathy given to issues that should be worked on, but sometimes, we are too fearful of who will barrage us with backlash if we step into the shoes of others and speak out for them to be accorded more respect and kindness.

But it’s our Singapore that we will grow up in, and there’s no better time than now to practice the same sort of humility and appreciation for others’ differences, regardless of where you are accepted, because there will be people who listen and appreciate you as well.

Rasya, we are honoured to have had this conversation with you. We appreciate it.